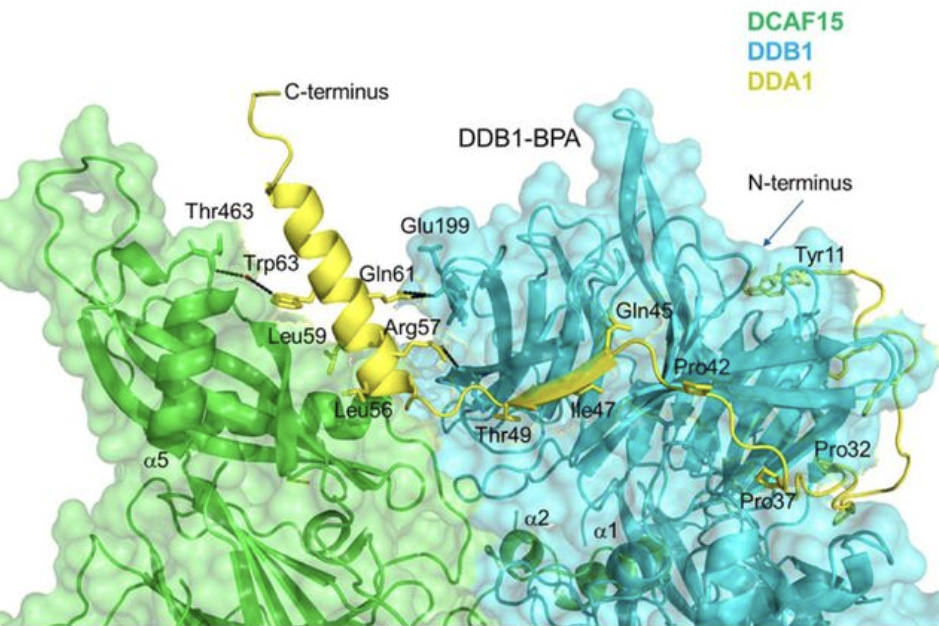 Targeted degradation of disease-causing proteins is a highly attractive emerging therapeutic approach for which numerous strategies are available. Among the most prevalent is the use of proteolysis targeting chimeras (PROTACs), bifunctional small molecules that recruit an E3 ligase to the protein target. Once in proximity, the E3 ligase ubiquitinates the target protein, leading to proteome-based degradation. Numerous successful PROTACs have been reported in the past 20 years.1-11

Despite this progress, PROTAC discovery remains challenging due to the complexity of the system, which requires heterobifunctional optimization of the small molecule in enzymatic systems with complex biochemical profiles and challenging structural characterization. To the latter, some structural information has been possible to elucidate for some systems via x-ray crystallography and/or cryo-EM (see https://www.biorxiv.org/content/10.1101/737510v1.full for an example), but routine characterization at high resolution for the full ternary complexes or for challenging protein targets (apo and/or compound-bound) is not yet typical.

Ideally, structural studies would provide not only a more traditional “view” of protein-ligand binding on either side of the PROTAC molecule, but also an insight into the points of interaction between the E3 ligase and the protein target (and how this correlates to changes in PROTAC design). The choice of surface lysine residue on the target protein for ubiquitin attachment, the recruitment of different E3 ligase variants, the binding affinities of a given PROTAC, its linker length, and the target protein itself all affect degradation efficiency, leading to a broad space for structural sampling and complex optimization.

Why are PROTACs systems difficult to study structurally?

In our experience, these protein-compound complexes are highly dynamic, exhibiting significant conformational and compositional heterogeneity:

(1)  Affinity between complex components. Beyond the affinity of the PROTAC for either the target or the E3 ligase, capturing the interaction of the E3 ligase for the target at the site of ubiquitination is also of interest and this state tends to be less well characterized in advance of structural studies.

(2)  Structural dynamics. Depending on PROTAC design, there can be a tremendous amount of freedom for the E3 ligase and the target to move relative to one another. For PROTACs with long linkers featuring rotatable bonds, this is especially so and can make high resolution structural analysis challenging (for more on ordered mass considerations, please check out our previous blog post).

(3)  Cooperativity. Observation of positive and negative cooperativity for the assembly of PROTAC-driven complex and resultant ubiquitination have been reported in the literature. Care must be taken in complex assembly, purification and sample preparation to bias the resultant sample toward formation of a stable, ternary complex. Slight changes in PROTAC design, however, can mean that optimum conditions for analysis of one ternary complex may not directly translate to subsequent complexes, even when the ligase and the target remain the same.

How might we leverage negative stain and cryo-TEM in PROTACs structural biology?

TEM approaches can accommodate much heterogeneity (compositional and conformational) in the sample while returning image-based information, even in the absence of high-resolution detail. For stable complexes in which the components exhibit high affinity, negative stain studies can provide not only quick assessments of suitability for ongoing cryo-EM efforts but also present detailed views of compositional and conformational. In instances where the complexes of interest are not amenable to significant dilution, direct analysis by cryo-EM provides an excellent alternative. Even low to moderate resolution observations obtained either through negative stain EM or cryo-EM workflows can provide valuable insights into the mechanisms of each complex system - how dynamic is the system? How many conformations might be present? Is there a tight/prolonged association of the degrader with the target?

For samples amenable to high resolution efforts, the cost and speed of cryo-EM structure determination are achieving levels at which the method is capable of supporting structure-based drug design campaigns in a routine and robust manner. Implementation of next generation tools for sample preparation and data processing will only increase the population of targets capable of achieving high resolution in a reproducible manner.