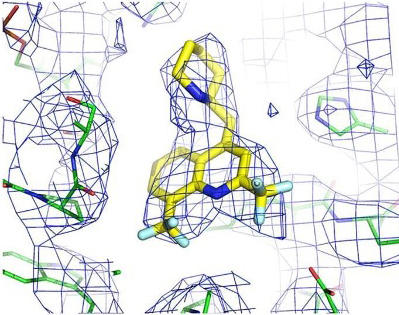 Medicinal chemists can modify and manipulate the central common core of protein scaffolds (also known as ’privileged structures’) to achieve new target specificities. A traditional drug discovery process relies on the observation of validated lead compounds on the physiological or pathological state of a test biological system. After initial Iterative synthesis and biological testing on protein targets, the later stage optimization of safety and efficacy is often the last hurdle to bringing therapeutics into the clinic. (1, 2)

Modern genetics and high-throughput molecular biology approaches have identified an array of novel cellular targets, necessitating the discovery and design of new drug molecules to treat myriad diseases. In the initial stages of a modern drug discovery process, small molecule modulators are selected based on the level of activity in a suitable target assay. This selection may require no prior knowledge of the ligand or the target and is extrapolated from hit identification strategies such as biophysical or biochemical testing.

In other cases, direct visualization of the target and ligand interactions are critical for program progression. Structural enablement can be accomplished by nuclear magnetic resonance (NMR), X-ray crystallization and more recently cryogenic transmission electron microscopy (cryo-TEM/cryo-EM). This is often supported by follow-on structures of elaborated compounds or strategic mutagenesis. (3, 4)

How cryo-EM can improve the design of scaffolds.

Figure 2. Using Cryo-EMStructures to Guide SBDD (9)(A) Density for theantimalarial mefloquine as visualized in the 3.2 Å cryo-EM map (A and B) were generated with PyMOL, from map EMD-8,576 and PDB: 5UMD. (B) The structure revealed an empty pocket within the ligand binding site (red circle). (C) Left panel: the red circleidentifies the position where mefloquine could be modified to extend into thepocket shown in (B). Right panel: the bicyclic piperidine replacement extends into the pocket identified by the red circle. This structure guided modification of mefloquine resulted in derivatives with a 2-fold potency enhancement towards the parasite (8).

The ability to study molecules in native-like lipid environments is particularly advantageous for notoriously difficult targets such as membrane bound receptors, ion channels and enzymes. Since proteins are vitrified in a solution state, multiple conformations of a target molecular machine can be captured and visualized from a single dataset. Additionally, unanticipated binding sites for physiological ligands or drug molecules can be captured even if they induce unforeseen conformational changes.

Since the method eliminates the need for 3D crystals of the target proteins, the timeline for cryo-EM structure determination for liganded complexes is often shorter and more predictable compared to apo target proteins. Importantly, due to the often specific and potent interactions between drug-like leads and their target proteins, the local resolution around the small molecule interaction interface is often higher than that reported for the global resolution of the map, providing the most valuable information to the medicinal chemistry team at the highest level of structural detail.

At resolution between 4.0-5.0 Å cryo-EM maps are sufficiently high quality to be used for in silico screening and docking to identify preferred pharmacophores and essential interactions that can be integrated with other rational drug design strategies. Coupled with appropriate activity assays and receptor pharmacology, low resolution cryo-EM structures are vital for discovery of initial hits.

The limits in resolution are often inherent in the samples due to conformational heterogeneity in solution. However, this challenge can often be overcome by collecting larger data sets, thereby increasing the number of particles belonging to each conformational class. Cryo-EM structures between 3.5-4.0 Å resolution can have well defined density for drugs and bulkier groups of a ligand. Aromatic rings can be useful as an anchor for modeling the correct orientation of the small molecule.

Cryo-EM structures with near atomic resolution are becoming routine thanks to continuous improvements and developments in image processing software, together with the introduction of new algorithms to mitigate the issues of conformational heterogeneity. The power of cryo-EM for structure-guided drug discovery is manifested in several recent studies where unknown structures of important targets were solved, opening new possibilities of targeting some of these molecular complexes in diseases. (5)

Seminal work has come from the laboratory of Yifan Cheng (6), delivering the high-resolution structure of the TRPV1 channel with two known drugs. (5) The Scheres lab (7) has resolved the high-resolution structure of the Tau filament. In the later work, the cryo-EM structure of Tau filament from an Alzheimer’s patient’s brain revealed the molecular code for the protein aggregation that, in future, may be targeted by small molecule inhibitors.

Similarly, Wong et. al showed that bicyclic piperidine extension of the antimalarial drug mefloquine fills the empty cavity in a drug-binding site on the plasmodium falciparum 80s ribosome. At a moderate resolution of at 3.2Å, this structure-guided modified inhibitor shows improved parasiticidal effects (8) For more seminal work, refer to. (9, 10, 11, 12)

The “resolution revolution” in cryo-EM has resulted in an explosion of structures of biological macromolecules of both academic and drug industry interests. Many protein complexes and protein-ligand structures have been solved with atomic resolution details providing new insights into the mechanistic understanding of the biological roles and disease relevance of these molecular machines. Cryo-EM is taking a new leap and many pharmaceutical companies are investing in cryo-EM for drug discovery. With continued developments on various fronts, particularly high-throughput capabilities for sample preparation and use of machine learning for grid screening and data collection, cryo-EM is becoming an integrated part of many structure-guided drug discovery projects.

Structure Matters: Characterization of the hERG anti-target by cryo-EM
CryoEM: What Level of Outsourcing is Right for You?
Three Common Challenges to Adopting Cryo-EM in your Drug Discovery Program (and How to Overcome Them)
Solving the Challenges of Preferred Orientation in Cryo-EM Sample Preparation
Skipping Negative Stain
Ordered Mass in Target Selection & Protein Engineering
Comprehensive Assessment of Samples for Cryo-EM Feasibility
Negative Stain for High Resolution Cryo-EM Workflows
Imaging PROTAC Mediated Degradation Complexes with Cryo-EM
How Cryo-EM can Improve the Design of Scaffolds in Medicinal Chemistry
Cryo-EM: How to Test the Waters with a Proof-of-Concept Study
Overcoming Bottlenecks in Cryo-EM Enabled Drug Design
Cryo-EM in Gene Delivery
High Resolution Epitope Mapping with Cryo-EM
Antibody Development - Structural Characterization of Antibodies with Cryo-EM
Prev
Back
Next